On Saturday i did a little practice Sprint Triathlon with my sister. I got up at 7:30 (remember this is a Saturday, and yes its not exactly early, but its still a Saturday) went to the gym for opening time and did the 400m swim. Then onto the Nostel Parkrun for the 5k part, i took my bike in the boot of the car and after the Parkrun did a nice 15k on the bike.

Obviously there was time from the swim to Parkrun and from Parkrun to bike ride. The swim took me about 8 minutes, the 5 k took me 27 minutes, which i know is slow but i felt really good and i reckon i could have gone sub 26 mins if i hadn’t have held back. The bike ride took about 40 minutes.

I have no idea about the times i should be aiming for, being as this is my first one. I have googled beginner times, which spits out a load of shit, but i did kind of find this

I have no idea if this is anywhere near right, I have signed up for another on though in June. This one is in Leeds and is only a 200m swim in open water though, 5k run, 20k bike ride. I really need to practice on the bike! 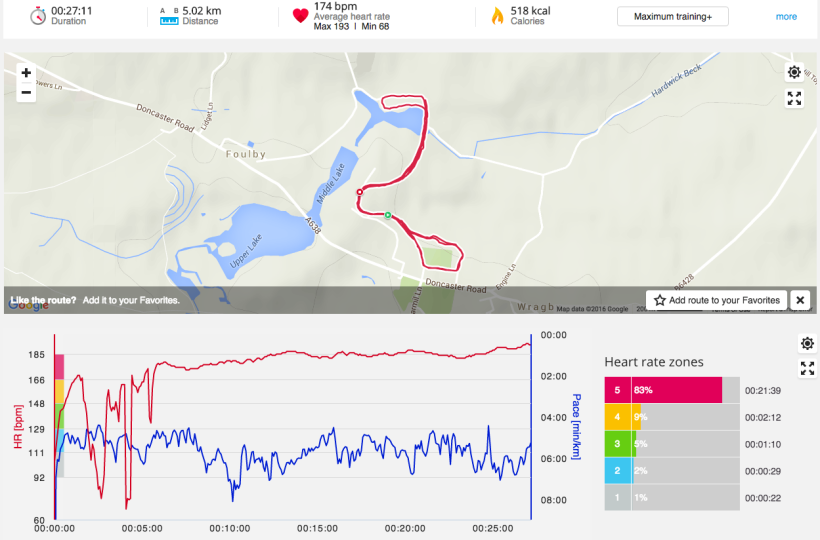 This is the data from the run.

This is from the bike, i never really felt pushed, tired or out of breath on the bike, but my legs were in bits on the hills, i’m assuming this is due to the fact i haven’t really ridden a bike for like 10 years! I thought i could get away with little or no practice on the bike, as from my memory riding a bike as a kid was easy! I’m a dick!

The triathlon is around York though, and there isn’t any hills around York, so i’m hoping this really helps me out with the run and biking.